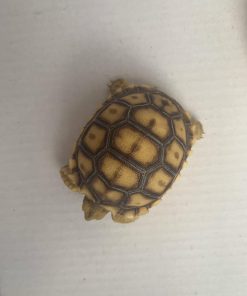 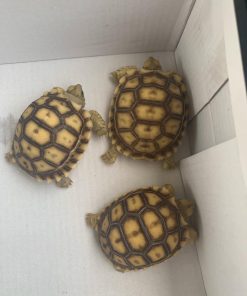 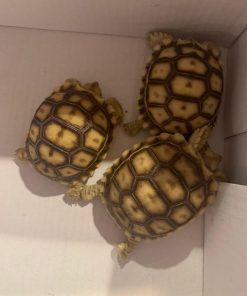 We have some fantastic captive bred Spur thigh tortoise for sale. The African Sulcata is one of the most popular pet tortoise

These Leucistic beauties are the offspring of two normal looking Sulcata who both happen to carry the very rare Leucistic gene. Mated separately, they are unable to produce Leucistic babies.

Tortuga Villa is one of only two known breeders in the world to produce the ‘Ivory-Pearl’ offspring.  Approximately 25% of every clutch are Leucistic.  According to studies, normal looking siblings (as shown in the center photo above), are calculated as having a 66.6% chance of carrying the Leucistic gene. These siblings are considered ‘Hets’  like their mother and father.

The primary difference between true ‘Albinos’ and ‘Leucistic’ is with the eye pigment. Albino genes cause a complete loss of pigment in everything, including skin, shell and eyes.  Albino eyes are actually clear (without color) and what you see are blood vessels at the back of the eye, giving the red appearance.   Leucistic genes cause a loss of pigment in everything except the eyes, leaving the eyes with natural color.  Although Leucistic babies are first born with clear (albino) eyes with dark red appearance, they eventually change to black during the first few weeks.

True albino eyes will remain red throughout life, making the outdoors (sun rays) an unhealthy environment, whereas, Leucistic tortoises (with black eyes) are not harmed by natural sunlight .