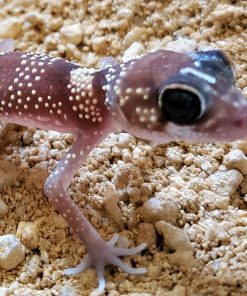 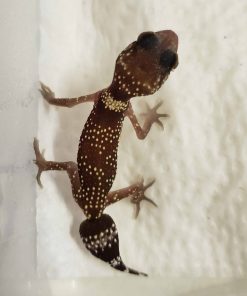 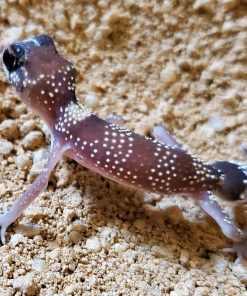 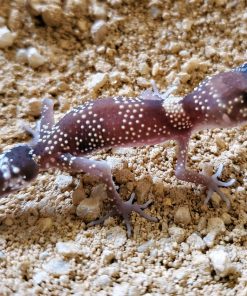 The Australian barking gecko, also known as the Australian thick-tailed gecko, has undergone a roller coaster ride in taxonomy, having been reclassified 22 times since its discovery in 1823. Its scientific name, most commonly recognized as Underwoodisaurus milii (pronounced under-wood-ee-sore-us mill-ee-eye) was overturned to Nephrurus milii in 1990, back to U. milii in 2000, again to N. milii in 2007, and is currently referred to as Underwoodisaurus milii, once again since 2011. Still loosely considered a knob-tailed gecko by most breeders and keepers, one name that commonly identifies this unique gecko is simply “milii.” In spite of the numerous efforts to figure out how to appropriately label them and properly pronounce their scientific name, these spunky little geckos remain unaffected by identity crisis—they know exactly who they are!

The Thick Tailed Gecko (aka. Barking Gecko) is a medium-sized nocturnal gecko native to Australia. Once recognized as a member of the Genus Underwoodisaurus it has since been reclassified as Nephrurus. They are terrestrial, though known to enjoy climbing rocks and exploring all they can reach of their enclosures. They also have an interesting behavior that gave them the namesake of Barking Gecko. If frightened or disturbed they will stand tall and make a sharp high barking sound and wave their tail while lunging toward their perceived aggressor.

Life Span: Known to live up to 15 years in captivity, however the peak of their breeding happens around 5 years, and 10 is considered an old animal.

Size: Typically females are a little larger than males. Females can be as large as 5.5 inches, where a male will typically not be larger than 5 inches. Weight for this species varies greatly based on what locale you have and how well they have been cared for. In general it seems most people have females in the 20-25 gram range as adults, and males will be 15-20 grams. Though some people reported theirs got as large as 30 grams for either sex.

Appearance: These geckos have a medium build with a very widely varied coloration. Their skin is smooth with small tubercles all over their backs and legs, with some larger ones on their tail. They can and will change colors from a light to dark phase throughout the day. The southern form, which are more commonly kept in captivity and are the local we are discussing, have a thicker band of lighter color (generally white or yellow) around their neck and lighter spots on their tubercles all over their bodies. They have been specifically bred to be “normal” (dark brown with yellow or white spotting), “light or hypo” (tan to cream base with yellow or white spotting), and “ultra-light or super-hypo” (gold, orange, or light pink base with white spotting). While they are in a genus commonly referred to as “knob-tailed geckos” they do not in fact have a knob at the end of their tails like the n. amyae, or any of the n. levis. Their tails are thick and wide at the base and make an almost heart-like shape, but the bottom point of the “heart” is elongated and pointy instead of ending with a knob like other members of the genus.